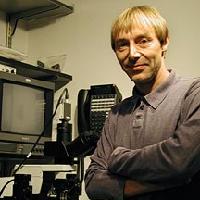 Dr. Paul Schweitzer focuses on the cellular and molecular mechanisms of action of substances of abuse and their interaction with endogenous transmitter systems in the brain.